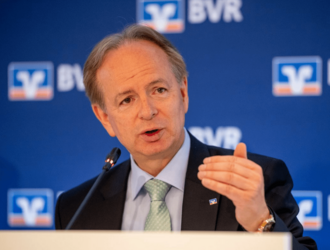 In 2017, the Volksbanken Raiffeisenbanken Cooperative Financial Network generated a sound consolidated profit before taxes of €8.9 billion, an increase of 7.3 percent. It also significantly boosted its equity to €104.4 billion, the first time that this figure has exceeded the €100 billion mark at consolidated level. The Cooperative Financial Network is thus well equipped to cope with possible threats to global economic growth.

The annual consolidated financial statements of the Cooperative Financial Network, in accordance with International Financial Reporting Standards (IFRS), provide information on the financial year of the 915 local cooperative banks, Sparda banks, PSD banks, and other cooperative specialized institutions as well as DZ BANK and the main product specialists, i.e. the mortgage banks, Bausparkasse Schwäbisch Hall, R+V Versicherung, Union Investment, VR Smart Finanz (formerly VR Leasing), TeamBank, and DZ PRIVATBANK. The Cooperative Financial Network’s loans and advances to customers rose by 3.9 percent to €762 billion. There was a similar increase of 3.5 percent in deposits from customers, which reached €801 billion. Growth in lending to retail customers was driven by private home loans andthe main growth factor in corporate customer business was lending to the service and construction industries.

"The strong growth of client driven business was the key part in boosting our profits, even during the currently challenging interest-rate environment,” explains Marija Kolak, President of the Bundesverband der Deutschen Volksbanken und Raiffeisenbanken (BVR) [National Association of German Cooperative Banks]. "We have to continually come up with new ideas to meet the expectation of our 30 million customers as well as dealing with technological developments and new competitors. That is why the BVR’s annual general meeting in June gave the permission for Fiducia & GAD IT AG to invest a further €500 million in IT that will be accompanied by further investments of the DZ BANK Group.”

As far as the economy is concerned, the BVR recognize the growing protectionist tendencies and the resulting risk of a trade war as threats to economic growth. "The only answers for us is a strong Europe,” believes Kolak. "But a strong Europe also requires the economies of the EU member states – particularly those in the eurozone – to be very crisis-resilient,” she continues. So far, however, too few countries have used the period of low interest rates to consolidate their public finances.

A potential risk is also the high volume of government bonds held on the balance sheets of banks in some eurozone countries. Kolak has calculated that "Italian banks would need to reduce their holdings of bonds and loans by just over €370 billion in order to lower their proportion of receivables from the Italian public sector to the level seen in Germany, which is close to the eurozone average. This shows why it is from utmost importance to reflect the risks of public exposure on banks’ balance sheets and to back them with regulatory capital.” According to Kolak, risk reduction is a major factor in the political discussions about a common European deposit insurance scheme or an enhanced European Stability Mechanism.

In 2017, the Cooperative Financial Network’s net interest income was €18.6 billion, which was almost at the prior-year level of €18.8 billion. Net fee and commission income increased by a substantial 8.9 percent to nearly €6.5 billion. Customers reacted on the the low level of interest rates and increasingly investing in securities and funds.

The Cooperative Financial Network posted a consolidated net profit after taxes of €6.1 billion, which was 3.0 percent more than in 2016. There was a small rise in consolidated total assets, which grew by €27.5 billion to €1.24 trillion.

The Cooperative Financial Network’s equity exceed the €100 billion threshold for the first time, advancing by 6 percent to €104.4 billion as at December 31, 2017. The primary institutions held around 87 percent of this capital. As in previous years, the increase was largely due to the retention of profits generated in a challenging market environment. In addition, the cooperative banks have issued new shares to cooperative members totaling almost half a billion euros (€0.46 billion), a rise of 4 percent.