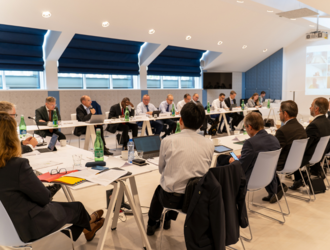 Last Friday, the European Association of Co-operative Banks (EACB) held its 47th General Assembly (GA) in Vienna, Austria. The event was hosted by Österreichischer Genossenschaftsverband (ÖGV) on the occasion of its 150th anniversary. Guest speakers for the Assembly included Mr. Gottfried Haber, Vice Governor of the Austrian National Bank in charge of Financial Stability, Banking Supervision and Statistics, and Ms. Uta Pock, Chief Economist and Head of Research with Volksbank Wien AG.

Welcoming Mr. Haber in the meeting proved to be an ideal opportunity for GA delegates to hear first-hand the perspective of the Austrian NCA on key ongoing regulatory and supervisory dossiers and garner insight into the views of the Austrian supervisor for Europe’s banking sector. Topics addressed included the current economic environment, the use of macroprudential tools and their interaction with the wider CRR-CRD framework currently under review to implement Basel reforms in the EU. Discussions also covered the preparation of the Commission legislative proposal with regards to the review of the crisis management framework (CMDI) and the design of a digital Euro.

Daniel Quinten, EACB Vice-President chairing the meeting, congratulated ÖGV on the important anniversary which he noted was “an impressive feat and testimony of how vital the co-operative movement is.” He went on to say that Members of the EACB General Assembly were “honoured to be able to exchange with Mr. Haber and Ms Pock. They were keen to hear his views on the implementation of the Basel reforms in the EU, especially in light of the CRR-CRD review which is expected to lead to large capital needs and administrative efforts. This will divert resources from sustaining customers in a challenging macroeconomic phase and from financing the transition to a more sustainable economy. It is hard to predict how the current uncertainties will evolve, but it is clear that we cannot afford to put the EU banking sector at a disadvantage compared to other jurisdictions. Adequate EU adjustments are needed to reflect the nature of our credit and banking market, and we should avoid gold plating rules that are designed to be applied only at a consolidated level.”

Dr. Rainer Borns, Board Member of the EACB and Chief Financial Officer of Volksbank Wien hosting the meeting, declared: “This year, ÖGV celebrates our 150 years of existence. Our story began on 4 August 1872, and since the principle of co-operative economic activity has survived crises and wars. Today, it is more modern and sustainable than ever. For our 150th anniversary, we’ve selected the motto ‘Building the future with trust.’ It’s the trust that we share with our customers, colleagues, fellow members of EACB, supervisors, regulators and other stakeholders. It enables us to gain such value from events like this and drive forward the interests of our members in the challenging macroeconomic climate in which we find ourselves.”

Nina Schindler, Chief Executive Officer of the EACB, warmly congratulates the ÖGV on behalf of EACB. “This is an important milestone for the ÖGV as well as the concept of co-operative activity as a whole. Co-operatives have at their heart regionality, sustainability and cooperation. These themes have been truly shown here today with this festive programme. It aptly showcased the important role co-operative banks play in the Austrian economy. Such a significant milepost helps to reaffirm our co-operative values and faith in the future,” she said.