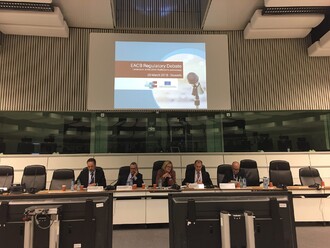 Co-operative banks ask adaptations in the supervisory, resolution, prudential and governance framework to take into account their Difference

Brussels, 20 March 2018 - Leaders of co-operative banks and EU authorities met today in Brussels at the Regulatory Debate organized by the EACB (European Association of Co-operative Banks) to discuss the developments in prudential regulation, the capital markets union and the review of the resolution framework, among others. The event took place in the context of the celebrations of the 200th Anniversary of Raiffeisen, one of the pioneers of the co-operative movement.

“At a time when the EU Institutions are completing some of the crucial building blocks of the regulatory and supervisory framework we need to underline once more the need to consider the co-operative banks’ difference. We are very proud of our roots and our specificities that are celebrated around the world throughout the year. More than ever our model is in line with the expectations of people for customer/member focussed banking. Co-operative banks stand for “sharing economy” and sustainable banking, ideas that have been re-discovered in recent years. We are also drivers of the socio-economic developments in European regions and local communities,” declared Gerhard Hofmann, EACB President. “We will continue to do so if the regulatory framework or the supervisory practices will allow us and not restrict or even call into question the specific characteristics that made co-operative banks strong. For example, we discussed today the need to consider the co-operative networks and an adapted MREL in the resolution framework, the need of flexible and transparent SREPs as well as resolution strategies; last but not least the current governance principles of the EBA and ESMA: it is not acceptable that values on which co-operative banks across Europe take strength - proximity and members participation - are undermined by overly formalistic approaches such as on the concept of independence which is interpreted beyond what European legislation foresees. We call EU policy makers and authorities to strive for a fit-for-purpose regulation that takes into account proven governance models, fosters growth and maintains the undisputed merits of a diversified banking sector. I thank the speakers for the constructive dialogue today”, Hofmann concluded.

The event was marked by the intervention of Dominique Laboureix, Member of the Board, Single Resolution Board, Martin Merlin, Director, DG FISMA, European Commission, Giacomo Caviglia, European Central Bank and Peter Simon, ECON Member, European Parliament as guest speakers. Jan Smets, Governor of the National Bank of Belgium and Member of the Governing Council and the General Council of the European Central Bank, delivered the final keynote speech. (Full Programme)

At the occasion of the Regulatory Debate, the EACB published and distributed the document “Co-operative banks policy messages on regulation and supervision”.

Finally, a new booklet, dedicated to the 200th Raiffeisen anniversary and entitled “Co-operative banks at the service of their Members and Society” was also released. “I am very honoured that the EACB is celebrating and bringing its contribution to this special year for the global co-operative movement”, commented Herve Guider, EACB General Manager, “the co-operative idea - based on the principle of self-help and solidarity - has shaped the lives of many people worldwide in a profound way. I invite you to read this very interesting publication and the testimonials of co-operative banks leaders on the features, the timeless values and contemporary relevance of the Raiffeisen’s principles in banking today and tomorrow”, he concluded.