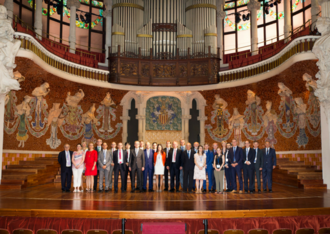 BARCELONA, 16 June 2017 – The Executive Committee of the European Association of Co-operative Banks (EACB) has met today in Barcelona for its 30th meeting. About 40 co-operative banks leaders have gathered in Barcelona to mark the 50 anniversary of the Spanish co-operative bank “Caja de Ingenieros”. Works have focussed on the banking regulatory framework at EU and international level, corporate governance, digitalisation and sustainable finance. In particular, on the issue of governance a specific workshop was held to exchange practices.

“Co-operative banks are major players in the European Banking Union. They have a distinctive model based on member’s ownership, network organisation with internal solidarity systems and stable deposit focus. These peculiarities are enabling them to continue fostering growth in the regions they belong to“, stated Gerhard Hofmann, EACB President.“However the international and European regulatory or supervisory initiatives are often not taking into account the co-operative banks specificities and risk profiles (i.e. established, well-functioning operational arrangements in our networks). Additionally the current framework is too complex and unstable, leading to disproportionate implementation and compliance costs for our banks. We need to ensure a lower burden in terms of reporting, disclosure requirements and corporate governance. Regulation should not shape banking models and structures.” - Hofmann continued- “Despite these challenges, our co-operative banks are powerful innovators in the new digital era: thanks to the Members’ involvement they are leading the way in many respect. They are also engaged in the EU territories to finance SMEs, green growth and the energy transition. We hope that regulators will ensure a policy framework and a number of tools conducive rather than hampering the role of co-operative banks in the EU regions”.

The EACB stresses the importance of achieving a balance in the EU Risk Reduction Package. Increasing financial stability must not hamper economic growth and financing of the real economy, especially private households and SMEs, who play a key role for the recovery of the European Economy.
We appreciate the efforts produced towards a more proportionate regulatory framework but more could be done for example in reporting and remuneration. We also underline the need to avoid any undue standardisation of the requirements of the Pillar 2 framework, the importance of carefully adjusting the implementation of the new market risk framework, the importance of adjustments to the resolution framework and requirements (MREL/TLAC) that reflect the reality of the EU banking industry and of co-operative institutions.
Finally it should be ensured that the EU does not front run in the implementation of measures still being debated at international level in Basel, to avoid a globally uneven playing field or any gold plating.

The regulatory environment has been in continuous motion since the onset of the crisis. Regulatory reforms have not only created many areas of overlapping, but with their constant changes also contributed to regulatory uncertainty and difficulty in forming expectations for market participants.
Numerous elements have been undergoing discussions or repeated technical adjustments for some time (e.g. leverage ratio, NSFR, the market risk framework, the MREL, the stacking order of capital buffers etc).
Moreover, while the implementation of the reforms already finalised in Basel goes forward, the Basel Committee has continued its work on other aspects that will require further regulatory reforms. The EACB expresses its concerns that the remaining elements, in particular the introduction of an output floor for internal models for credit risk, the treatment of agricultural collateralised lending, and the treatment of equity participation in the non financial sector for the standardised approach, would have significant negative consequences for the well functioning of credit channels in Europe and ultimately on the performance of the real economy.

The supervisory reporting framework and the disclosure requirements constitute a key example for the necessity of a more holistic application of the proportionality principle. Reporting requirements are rising enormously. Small and medium sized, local banks but also larger regional institutions with a low and conservative risk profile, regardless of their work in local niches and limited staff have still overwhelming reporting requirements, often not adequate to the scale of their operations and the risk entailed. This poses a clear level playing-field question with respect, for instance, to lenders operating under different prudential regimes such as FinTechs and potential newcomers.
We see a clear need to address the reporting and disclosure framework in a way that is cost efficient and proportionate to the business models, to the different sizes and to the complexity and level of risk of firms supervised.

Good governance ensures financial stability. When developing common principles regulators should be mindful of the functional and legal specificities of co-operative and mutual institutions. The focus on members’ economic interests, the one person – one vote principle, the member ownership and other elements do not simply provide a variety of governance, they rather lead to a completely different governance model with  different mechanisms.
The members of the EACB are seriously concerned by the introduction of a “formal independence” requirement for directors, in addition to the “independence of mind” criterion stipulated in the CRD. The introduction of such an additional element, with far-reaching consequences via guidelines, is without any legal basis within the CRD or CRD.

With PSD2 becoming applicable in January 2018, EACB members are investing heavily to prepare for the new reality whereby non-bank payment service providers can access the accounts of bank customers. They are concerned however that several implementing rules are not yet available and that, when it comes to the communication between those non-banks and banks, regulators and supervisors do not see eye to eye. Security is key and major payment infrastructure should not be endangered by unsafe technologies loopholes The EACB Executive Committee calls upon both supervisors and regulators to ensure that the final implementing rules respect the need for operational efficiency and security at the side of banks, ensure that banks can respect their duty to protect both their customer data and funds and allow for the promise of PSD2 to be exploited not only by established players but also new ones.

With the Commission consultation on Fintech in mind, the EACB Executive Committee reflected today on the impact of new technologies on financial services and whether the regulatory and supervisory framework needs adjustment in this context. Co-operative banks expect new technology to have serious impacts on their business model. At the same time however, they believe that technology can also help in delivering certain services in a more consumer friendly way or in organising processes more efficiently. Key from the perspective of co-operative banks when it comes to the legislative framework is, however, not to mistake the promotion of “Fintech” with the promotion of “start-ups” but rather to look at what functions “fintech” or “financial technology” aims to perform. There should be a level playing field between the banks, which are the major users of and investors in financial technology in Europe, and newcomers, start-up or huge international technology companies.

As local and regional banks, co-operatives play a key role in financing the energy transition (i.e. sustainable investment or savings, energy project financing, local green financing or energy efficiency financing). Indeed households, local communities and local entrepreneurs can be a powerful leverage in mobilizing climate financing. However, the European Commission and the international debate is often too focused on the capital and asset management side. Instead, in EACB’s view, EU and international policy makers should put greater emphasis on the retail side by providing a series of tools and policies that are conducive to green growth in the regions via SMEs, households and local actors.
At the European level, while regretting the unbalanced composition of the EU Commission High Level Expert Group on Sustainable Finance, we recommend that the local financing dimension is integrated in the forthcoming recommendations at the end of 2017. The EACB is developing concrete proposals in this respect, such as the introduction of a lower risk for assets related to Green Financing (Green Supporting Factor)