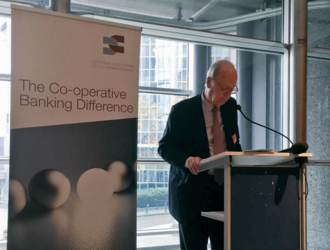 Brussels, 30 November 2017 – Sustainable finance was at the heart of today’s lunch debate organised by the EACB (European Association of Co-operative Banks) at the European Parliament and hosted by MEP Sirpa Pietikäinen - in the context of the forthcoming report of the High Level Expert Group on Sustainable Finance (HLEGSF) and the announced EU Commission’s Action Plan (Q1 2018). The EACB also released a Policy Paper with views and suggestions on possible regulatory and supervisory changes and incentives.

As local and regional banks – with 58.000 outlets and 209 million clients across the EU - co-operatives banks play a key role in sustainable financing (via sustainable investments or savings products, energy transition project financing, green financing to SMEs and energy efficiency financing of private and public buildings or via their social mission: reinvesting significant portions of available profits back into the community). Some co-operative banks are leaders in green bonds.

However, the current complexity and continuous motion of the regulatory framework is heavily affecting the local co-operative banks and their economic and social role. Additionally, maintaining diversity in terms of ownership structure, organisational settings or risk profiles in the banking sector is essential to sustainability, beside systemic resilience.

"Acting in favour of sustainable financing is in the very nature of co-operative banks whose mission is to accompany members and clients, as well as their communities, in the long term. Households, local communities and local entrepreneurs are mobilising in favour of climate. Co-operative banks are on their side" stated Mr Pflimlin, Chairman of the EACB Task Force on Sustainable Finance "However the European Commission’s and the international initiatives are often too focused on the capital and asset management side. We believe that a greater emphasis shall be put on the retail side of sustainable financing by providing a series of tools and policies that are conducive of green growth in the regions via SMEs, households and local actors. This should be a priority in the final recommendations of the HLEGSF and in the further steps of the European Institutions. Co-operative banks shall be closely involved."

Ms Sirpa Pietikäinen, MEP, rapporteur circular economy and former Finnish Minister of Environment, commented: “Sustainable finance initiatives are crucial for the long-term growth and competitiveness of the EU. Resource scarcity and environmental risks should be incorporated in financial legislation inter alia concerning credit ratings, capital requirements, insurances, financial product information, accounting and auditing. Capital markets can also be reoriented towards long-term sustainability through the integration of environmental factors. These are aspects that I look forward to emphasising as the Parliament, beginning with the ECON Committee, starts its deliberations on the Capital Requirements Directive. Co-operative banks, with their local focus, play an important role in this and we must preserve it, for example with proportionality. I look forward to continuing this discussion with EACB.”