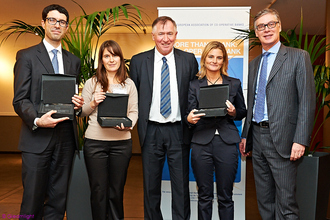 Co-operative Banks play a key role in the European financial and banking systems. Half of all existing banks in Europe belong to the decentralised network of co-operative banks while their market share in the enlarged EU is about 20%. In some countries, the market share on deposits lies well above this figure, as is the case in Austria, Germany, Finland, France, Italy and the Netherlands.

The EACB received ten applications, from six different countries and on a broad array of subjects related to co-operative banks. The scientific committee of the first EACB award for young researchers on co-operative banks, after careful selection and according to the criteria established in the Call for Papers, has selected the following winners: