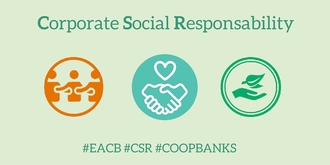 ENVIRONMENTAL BALANCE SHEET OF THE RZB GROUP IN AUSTRIA

The Raiffeisen Banking Group (RBG) created an environmental balance sheet for the 2014 financial year in cooperation with the “Umweltbundesamt” (Environment Agency Austria).

Roughly 8,600 tons of CO2e emissions were produced due to the business activities of the RZB Group in Austria. The largest share at roughly 72 per cent of the emissions (about 6,200 tons CO2e) resulted from the extensive air travel in the area of mobility. The provision of space heating (roughly 1,450 tons or 17 per cent) and the electricity requirements (roughly 600 tons or seven per cent) were also responsible for significant quantities of emissions. Office materials at three per cent and cooling at one per cent play a lesser role and were therefore not subjected to further special analysis.

Many sustainable financing projects and investments of the RZB Group in Austria make important contributions to the environment. The potential for greenhouse gas reductions within our own sphere of influence (building related measures) as well as through loans issued to customers for renewable energy and energy efficiency was evaluated.

Most of the companies of the RZB Group invested in thermal renovations and alternative mobility. Through the measures within our own sphere of influence, a total of roughly 37 tons per year of greenhouse gas emissions have been saved. It is important to note here that many of the measures exert these effects not only in a single year but over the course of a number of years (with effect size tending to decline over time), depending on the type of the measure. Roughly 37 tons of GHG emissions are produced by the burning of about 12,000 liters of fuel oil.

For more information, you can find the entire environmental balance sheet report HERE